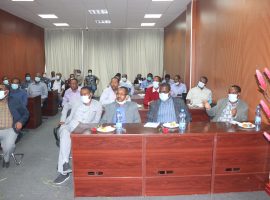 On January 13, 2022, Africa Center of Excellence for Climate Smart Agriculture and Biodiversity Conservation, in Cooperation with Haramaya University, inaugurates state of the Art video Conference Center. The video conference was constructed by Moti Engineering with a total budget of around 9 million ETB, out of which around 3 million ETB was covered by Haramaya University as a cellar budget to start the construction/installation.  The remaining amount, about 6 million ETB was covered by ACE Climate SABC.

About 40 senior staff, directors, and vice presidents of the Haramaya University were participated on the inauguration ceremony.  ACE Climate SABC’s Training and Research head, Dr. Sintayehu Workeneh has addressed the participants about the purpose of the event and invited the Deputy center Leader of ACE Climate SABC, Dr. Bobe Bedadi to the fore to address most of the achievements by the Center since it was operational in 2017. Dr. Bobe has welcomed the participants and appreciated their presence to celebrate the success of the Center. He also addressed them that the center has successfully accomplished the admission of MSc and PhD students from national and regional countries to the Center with more than 100 % of its plan. He has also explained that the Center has been tirelessly working and achieved incredible results in linking itself to different partnerships, inviting guest lectures from different countries, working on sustainability of the Center by which it has secured to be a Host for PASET-RISF PhD Scholarship, publications, exchanges and international accreditation of the MSc and PhD programs. He added that Development of ICT infrastructure and Website is also one of the core activities of the Center that lead to the construction of this state-of-the-Art Video Conference which would build the Capacity of the Center and HrU for qualified online/virtual learning.

ACE Climate SABC center leader, Professor Mengistu Urge has also welcomed the participants and he explained that this project is one of the projects that we need at this time. He says, the Government is planning to begin MSc program in an online/virtual platform with some Universities that have infrastructural capacity, and we aim to be one of those Universities. It is a good infrastructure for an online learning that would help us to pursue the program. “Now we have it, but we need to know how to appropriately use the infrastructure for efficient utilization of the video conference as of tomorrow”.

One day before the inauguration date, on January 12, a user based technical training on the video conference was given by Kennedy Buzayehu one of the   team from Moti Engineering. The training was given for selected HrU ICT and ACE Climate SABC’s staff. The training was opened by Belete Shawel, ICT director at Haramaya University, who emphasized the relevance of the training for the participants to Launch the video conference center. He says, we need to have such training in order to make the Video conference meet its target in implementation of conferences from different areas and online/ virtual learning that HrU is planning to begin.

The training covered topics relevant to the user of the Video conference such as project objectives, HrU VCs Components, HrU VCs Topology, Servers, Server access and call for action.  The objectives of the project include point-to- point /multi point video calls, people and content functionality, soft client integration, record and playback functionality, wireless presentation, content sharing and HD mic and sound systems.  About seventeen trainees were participated on the technical training. The trainees suggested that the training was a very good opportunity and regular practical activities are needed to be efficient at making the video conference operational.